Wow!  What a fun night exploring and tasting some of the many foods and beverages created by fermentation!

Some of you have asked for Bob Peak’s PowerPoint presentation.  Bob’s generously shared it with SHW.  The presentation it can be found on the bottom of the  Mentors and Speaker Resources page under the Member Resources tab on this website.

His “Kushman by the Bottle” is a monthly segment heard on NPR / Cap Radio’s Insight hosted by Beth Ruyak.  Rick’s June 15, 2016 segment, in addition to other wine-related topics such as a $695 cork puller, highlights home wine makers and our very own enthusiastic Sacramento Home Winemakers.  Listen to the audio recording at this link:

Thank you Rick for the good vibes. and to member Helen Frisch for turning on her radio.

Bottle Talk with Rick and Paul

Rick Kushman and Paul Wagner and two crazy guys who know a lot and talk a lot about wine.  Rick’s a journalist and co-chief judge of the California State Fair wine competitions.  Paul is a wine industry guy who is focused on wine marketing.  Their show is called “Bottle Talk with Rick and Paul” and the programs can be streamed.  Click here to hear what they’re up to.

Bob was delighted to discover that SHW members Carol Clark and Sonia Baron pursued their dream and recently purchased a vineyard in Fair Play (El Dorado County) and have named their new reality Bom Vinho! At SHW’s recent Harvest Dinner, Sonia excitedly conversed with Bob about the Portuguese varietals that are growing on Bom Vinho! and also about Shaker Ridge Vineyard’s Portuguese varietals (owners Andy and Elizabeth Standeven are also SHW members).

Bob’s see Portuguese wines maybe as soon as the next harvest!  Check out Bob’s blog.

Karen MacNeil, author of The Wine Bible and The NEW Wine Bible (out Spring 2015), is launching a hilarious new video series about wine. “Bible Study with Sister Karen” will cover topics ranging from the taste of tannin to the sex life of grapes, and will be posted every Sunday (naturally) and Wednesday on Karen MacNeil’s YouTube channel and Facebook page.

“Bible Study with Sister Karen” debuts this Sunday, April 6th–don’t miss it!  Subsribe to her YouTube channel and Facebook page. 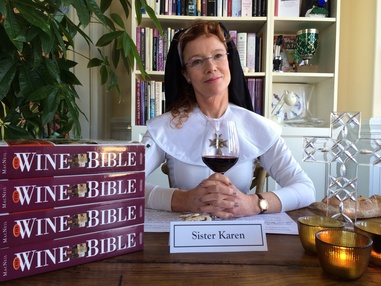 David would like to add a note regarding Sol Rouge Winery (one of the article’s main subjects) “…Bryan Kane’s winery is actually on Treasure Island along with 11 others.  It’s a wonderful and unusual afternoon of wine tasting to visit TI.”

(Hmmm….maybe we can convince David to coordinate a winery tour on Treasure Island.)

Here’s the link to the Lake County News article.  Lake County has lots to be proud of!  http://www.lakeconews.com/index.php?option=com_content&view=article&id=35540:lake-county-wines-garner-awards-at-american-fine-wine-competition&catid=1:latest&Itemid=197

Gerald’s been around the wine industry for a long time as a grower, educator, competitor and judge. He joined SHW way back when and has been a constant Club supporter. In fact, mark your calendars now for the October 17 meeting. Gerald is the evaluator and speaker that evening.  He’ll evaluate members fruit, port, dessert and sparkling wines first, then followed by a tastes-on presentation where you’ll have the opportunity to taste and pair his French Colombard with dried fruits, nuts, chocolates and cheeses.

The Vine of Life

You never know what life brings.  With the wine making experience of only one prior vintage in 2007, member Pilar Millar, now 84 years old, made a 2010 merlot.  She liked the taste of it and entered the merlot into the 2011 SHW June Jubilee and the wine won a silver award. What a sweet surprise for a octogenarian newbie winemaker!  One of the comments on the judging sheets said:  young, next year this wine will be a gold!

Fast forward a year later.  Pilar re-entered the 2010 merlot into the 2012 SHW June Jubilee and the wine did indeed win a gold award!  And, a week later, the merlot took the Best of Show honors at the San Mateo County Fair’s home wine competition. Later in the month, the same wine won a First Place (gold award) at the Marin County Fair’s amateur wine contest. What a month June has been for Pilar!

More excitement as the press came calling.  In late July, Univision 19 showcased a story on Pilar and her wine making.  The video, created by an Emmy award-winning team, captures Pilar’s exuberance and philosophy on life which has many parallels to wine making.

Station affiliates nationwide have also featured the video, and you can view it here by clicking on this link:  Abuela fabrica vinos en su cochera en CA

Many congrats to Pilar for earning top honors and sharing that you’re never too young for this much fun!